Mangalore, Jun 4: Veteran freedom fighter and well-known leader of the Communist Party of India (CPI) and former member of Parliament B V Kakkilaya passed away at 2 am on Monday June 4. He was 93. 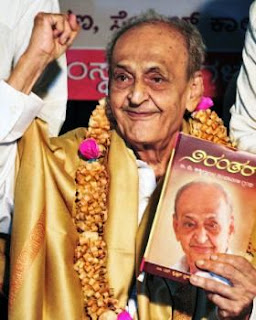 Kakkilaya was admitted to a private hospital on May 23 and was being treated for brain haemorrhage. He was on ventilator and his condition is said to have deteriorated two days ago.
Born on April 11, 1919, Kakkilaya was the pioneer of the Karnataka unification movement. A prolific writer and scholar, BVK, as he was popularly known, was involved in several people’s movements since his early days and was instrumental in setting up the All India Trade Union Congress (AITUC) in Karnataka. He played an important role in bringing about land reforms in the state.
Apart from being member of the Rajya Sabha in 1952-54, he was also a legislator in the Karnataka assembly from Bantwal in the 1970s.
In the 1940s, he participated in the Quit India Movement and many other freedom struggle movements. Even at that time, he fought for the rights of farmers and united them for a cause.
His wife Ahalya passed away in 1998 after a heart attack. He is survived by four sons Srinivasa (now a practicing physician at Mangalore), Venkatakrishna (now a neonatologist at Dallas, US), Harish (now a laparoscopic surgeon at US), and Suryanarayana (now a psychiatrist at UK).

Popular posts from this blog

March 09, 2016
Mangalore:Former MLC Octavia Albuquerque passed away on Wednesday, March 9 in a private hospital in city.She was 92.Octavia Albuquerque was member of Karnataka legislative council from 1970 to 1972. She was member of Congress party. She was also a social worker and a fireband  activist all her life.  Octavia Albuquerque an ex- MLC , a Rajyotsava awardee, and Founder MBeing the daughter of a Deputy Collector and later through marriage she was the daughter-in-law of the late Felix Pai Albuquerque, the famous tile business magnate of Mangaluru, Smt Octavia got the exposure and opportunity to turn philanthropic dreams and desires into reality. Her husband the late Cyril Albuquerque too was a guiding force and encouragement to her in all her activities. Unfortunately he passed away when she was just 54 years old but yet she did not deter from her set goals of doing good to society.ember of Cheshire Home-. Octavia Albuquerque is an Institution by herself ! in Mangalore, Known to all
Read more

March 14, 2011
Mangalore, March 14: In a bizarre incident, four vessels caught fire at Kasba Bengre under mysterious circumstances on Sunday afternoon creating panic among the fishermen and local residents.All the four ill-fated vessels were docked for repair works, official sources said. The fire which broke out at around 3:15 pm completely destroyed two cargo vessels named ‘Musthafa’ and ‘Abbas’ owned by Kunnhi Koya, from Hamaimi in Lakshadweep and TK Ahmed Haji from Kavaratti, Lakshadweep respectively, while passenger boat ‘Hasmi Madat’ owned by a Kolkata based businessman and fishing boat ‘Karavali’ owned by local entrepreneur Hameed Bengre have been partially destroyed. The owners of the cargo vessels claimed that they have suffered an estimated loss of Rs 50 lakh each, while the owners of fishing boat and passenger vessel put the estimated loss at Rs 5 lakh and Rs 7 lakh respectively. People at the ship yard, said they saw the fire blazing up to five meter high. However six fire extinguish
Read more

February 10, 2011
First man who landed in Mangalore Airport. War hero Vonthibettu Prabhakar Hegde made the first-ever landing in Mangalore, 59 years ago. His passenger: India’s first prime minister Jawaharlal Nehru . He tells Rajul Hegde the airport is tricky but not unsafe. War hero and pioneering aviator Vonthibettu Prabhakar Hegde won’t forget December 25, 1951, for as long as he lives.On that day the retired wing commander, now a spry 84, then an air force flight lieutenant, flew India first prime minister Jawaharlal Nehru on the first-ever flight to Mangalore airport (then called Bajpe Aerodrome) on a DC-3 (Dakota).Talking about the maiden flight from his home in Bangalore, Wing Commander Hegde told us, “When I landed for the first time at Bajpe, they were just digging and levelling the hill to build the runway. So it was just a non-tarmac, level ground, there was no airport as such. But the DC-3 is a small aircraft and it was easy for me to land it.”On being asked Nehru’s observation or if he co
Read more